Firstly I’d like you to meet my wonderful boyfriend Nathan …

We were lucky enough to be invited to a wedding in Thailand a couple of years ago and decided to make the most of our trip over there. A couple of our friends were travelling around Thailand at the same time so it was a perfect opportunity to meet up with them. We had all agreed to head over to the Phi Phi islands together for a coulple of nights before we had to head off to Phuket for the wedding at the end of the week.

The boat over to the islands was a great excuse to crack open the beers and get the holiday off to a flying start!  We had found a nice bar on the beach and by the evening the alcohol was certainly doing its job! This basially means us brits lose all of our inhibitions and have no idea what day it is. Inevitably this eventually led to a spot of skinny dipping in the Andaman Sea under the light on the moon. Something that is becoming a fairly regualr occurence for me when intoxicated abroad!. There’s nothing quite like the freedom of being completly starkers and floating around in the vast Ocean.

Nathan had decided it would be good idea to remove his swimming shorts after entering the sea and did not think to throw them onto the shore to collect afterwards. His shorts drifted out in the open ocean to be a sharks next meal or manta’s new hat. Anyway, they were never to be seen again! This unfortunately meant Nathan had nothing to wear when he got out! Remember, the bar was right on the beach!! He refused to get out of the sea whilst we all laughed at his misfortune. After some time, I couldn’t let him suffer anymore so agreed to give him my playsuit as I also had swimwear on. This was also pretty hilarious in itself!! It barely fitted around thighs and looked like a heart print nappy. This is a picture of me wearing said playsuit on the boat over to Phi Phi… 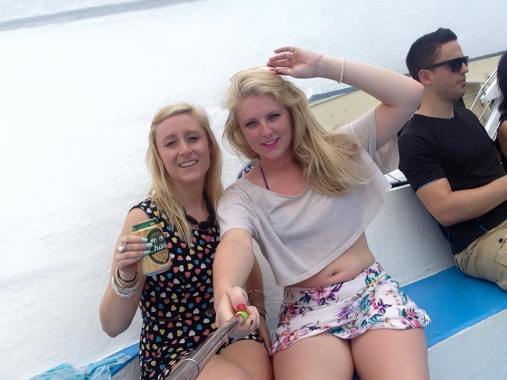 So, Nath didn’t quite reveal his man bits to the whole of Phi Phi island, but watching him squirm around in the sea like a helpless naked fish will certainly have a lasting memory 🙂 My only regret is not getting a picture of him in the playsuit!!

Luck wasn’t on his side for the rest of the holiday either. He though it was a good idea to eat a curry with an egg on it for breakfast in 32 degree heat… He spent the remainder of the holiday bed bound (or bog bound!!) 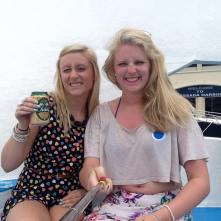 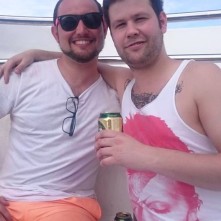 This is part of Winta’s 21 Days of Travel Blog Challenge GET INVOLVED!