This story starts in the quiet outskirts of Brighton. The road that I live on backing out into the South Downs National Park – I can smell the grass from my window in Hangleton. For some, walking and hiking is just a means to get from one place to another but for me it’s another excuse to be in the great outdoors and embark upon another small adventure. For me it is indeed the small things that spark my curiosity – A wild flower, a set of wooden rustic steps leading through the forest and the sound of a running stream with trickling waters. However, with my somewhat adventurous nature, never in my wildest dreams did I ever think I would climb a mountain – and actually enjoy it!

Some of you are probably wondering what on earth are Filas and what do ducks have to do with anything…The below picture beautifully illustrates my ye olde faithful Fila trainers and rubber ducky print socks!! At £15 in the sale these trainers have stood the test of time and have certainly gone the distance with me – through parks and up the South Downs on many a run or long walk. My tried and tested beloved trainers in all of their glory…

I very much loved these trainers but all of this was about to change…Whilst on a trek around Devils Dyke in the South Downs National Park, my sister Kat suggested that we needed to take the iconic ‘boot’ picture!! A scenic picture taken from a height along with your walking boots

Those suitably relevant and convenient walking boots belong to Kat!! Apparently my Fila trainers and duck socks are not exactly the height of fashion in the world of hiking and mountaineering – Climbing anything with a slope, my sister has scaled many mountains and quite frankly wouldn’t be seen dead wearing my Fila trainers on a Trek – she made this very clear to me before we set off, whilst we were trekking and more so afterwards. This opinion earned Kat the title of ‘The Mountain Snob’.

Anyone who has the pleasure of meeting my twin sister will know that she loves to talk about Mountains and this was no different on the day of our trek around Devils Dyke. I can’t quite remember how it came about (probably because I erased it from my memory for quite some time afterwards) but I agreed that one day I would climb Mount Snowdon with her, not really thinking it would be anytime soon. Boy was I wrong!! Despite loving a good trek, climbing a mountain was not something I had thought about doing. The image of hanging off a ridge a thousand metres high was not on my bucket list. I saw myself as the twin that loved to travel and explore the flat ground whilst Kat was the twin that climbed mountains for fun!  Within a day of The Mountain Snob returning to her home in Northamptonshire, a plan to climb Snowdon together had already been hatched…for 6 days later!! New walking boots and a Jacket were purchased immediately. My conditional rules were no scrambling, no Crib Goch ridge and strictly no hanging off the side of the mountain!! These will become my famous last words which you will discover in the next part of my story… 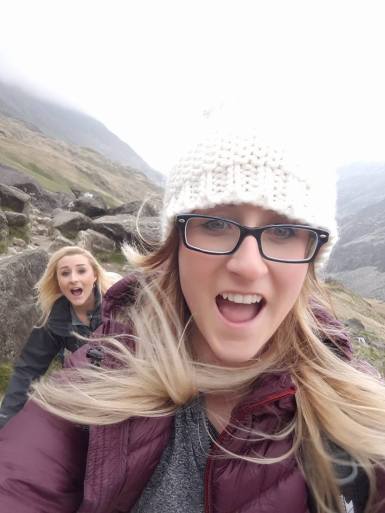 Well I certainly do bring the shite weather with me that’s for sure. The most beautiful drive through a cloudless Wales on a gorgeous Friday evening only to be met with clouds, drizzle, fog and wind on Saturday just in time for the ascent.  My sister has reached the summit of Snowdon 7 times and I distinctly remember her telling me that this was the worst weather that she’d climbed Snowdon in. Great stuff Kat.

All was going well on our mission up the Pyg track until we were around 15/20 minutes from the summit. We had reached a section where the path was not so obvious any more and people were scrambling up in different directions like small ants on a mound of soil. We decided to follow a couple of climbers around to the left and up. Kat had a feeling we had swayed from the correct path but we decided to continue climbing up in the hope it would join up. (Dumbass). Said climbers we had followed had already disappeared into the foggy mountain abyss, nowhere to be seen. Within a matter of minutes we realised we were stranded on what can only be described as a small grassy ledge of mountain hell, along with 4 other unfortunate climbers who had followed us! Going back down would result in certain death. A slippery slope of grassy doom. We attempted to move horizontally but the scree was falling beneath our boots. With the fog and wind rolling in fast we discussed the prospect of having to eat one another should one of us die first. (Kat was definitely being eaten first!) After some time debating our options, out of the fog emerged our knights in shining walking boots. Straight off the Crib Goch ridge and in search of the Pyg track, albeit they had gone the wrong way and followed our voices. 5 was now 9 on the ledge! One brave climber took the decision to scale up the pointed ridges above us and located the Pyg track some metres away. To get there involved scrambling and hanging off the side of the mountain! I have never been more afraid in my life – character building apparently! Well luckily we all made it back to the track in one piece and thank god for fog! It meant we couldn’t see downwards!

Despite this hairy mishap on my first ever mountain climb I had a huge sense of achievement back at sea level. Not only had I made it to the summit of my first mountain, I didn’t cry like Kat did the first time she climbed Snowdon (Sorry Kat). Rookie error number 1 – do not take a whole bottle of prosecco and the kitchen sink in your hiking bag!! Since climbing Snowdon I now find myself thinking the same mountain snobbery thoughts as Kat – What do I wear up my next mountain? Must get me some nice boots. Why did I ever think my Filas and ducks were a good idea? Sorry Kat but the Filas are staying for a bit longer, only for running now of course! I already have another 3 mountain climbs planned before the year is out. Scarfell Pike, Pen Y Fan and Corn Du. Sooooo here’s to a year of character building, adventures and eating your friends!!!

8 thoughts on “Filas, Ducks and the Mountain Snob – a character building journey to Snowdon”